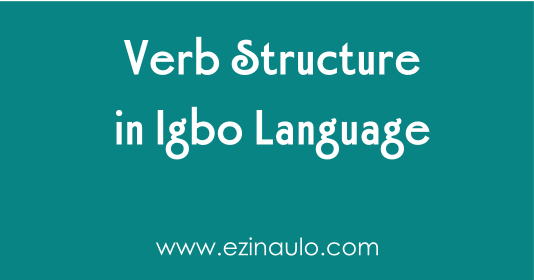 To learn how to conjugate Igbo verbs in various tenses, check out the following links:

How to Make Igbo Verbs Negative

In my research, I have found some people that say the present simple tense in Igbo is the same as the present continuous tense in Igbo. I am not sure if this is true across all dialects or not. If true, both of the example sentences above could be translated to M na-eri or A na m eri. I assume you would have to use context clues to know what present tense the person is using.

Many verbs in Igbo are transitive which means that they need to be followed by a noun to complete their action in a sentence. For example, in Igbo, you usually have to say “I eat food” and not just “I eat.” Or, you would have to say, “I run a race”, not just “I run”.

Your dialect may spell verbs differently than what is listed on my lessons. For example, the verb “bụ” (to be) can be written as “wụ” in some dialects. Also, the way to format Igbo verbs in present, past, future, and negated tense also varies across dialects. My lessons show some of the most common ways to conjugate verbs in Igbo that I have come across.